How an E-Bike Changed My Life 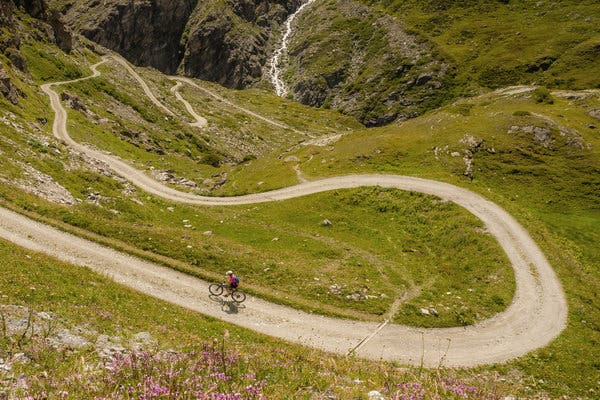 Riding grew harder as I grew older. Then I got an electric bicycle.

Made by Mattel, Vrroom — usually written with an exclamation point; Vrroom! — was a bicycle designed, as one commercial explained, “to look and sound just like a motorcycle.” A flick of a switch, and all at once your bike roared like a shovelhead.

All that noise didn’t make your bike go any faster, of course, but that was hardly the point.

I had forgotten all about Vrroom until last month. I was doing my usual bike circuit around the north half of Long Pond, here in Belgrade. As I turned left, I found myself accidentally merging into the Trek Across Maine, a three-day event in which cyclists ride from Brunswick to Augusta to Waterville and back again. It’s a huge event, drawing more than 2,000 riders; money raised during the trek benefits the American Lung Association.

It felt good to suddenly join the pack, and to find myself surrounded by all those other cyclists. But it was awkward, too, and not only because I wasn’t wearing a race number. More embarrassing was the fact that I was passing everyone, sailing up the hill on Castle Island Road in front of the Travis Mills Foundation for wounded veterans while everyone else was grinding away in low gear.

That’s because my bike was no ordinary road bike, but one of the new e-bikes now taking over the cycling world.

Although they’ve been around since the 1990s, until recently e-bikes were sold mostly in China and in Europe. But now sales are through the roof; in 2017 over a quarter-million of them were sold in this country, a 25 percent jump from the year before.

The principle is fairly simple: You plug the bike in at night, and it charges a battery that provides an extra level of support as you ride. You still have to pedal, but the battery silently doubles the amount of power provided by your muscles to the wheels.

For older riders like me — I’m in my 60s — the assist makes all the difference in the world. I’ve been riding all my life, and while I’ve never been a competitive cyclist, biking has always been my favorite form of exercise. In part it’s because I like the solitude of riding, especially on the remote trails where I take my mountain bike. I’ve encountered moose and deer and bald eagles during my rides in the Kennebec Highlands Reserved Land, eaten my lunch by a rushing stream, explored blueberry barrens high atop Vienna Mountain in Kennebec County.

(It is worth mentioning that in a column I wrote about cycling five years ago, I committed an error that demanded a correction that is still legendary among Times editors. I spoke of observing purple bird poop on a rock, the result, I said, of ospreys eating blueberries. By day’s end, the paper had to post this melancholy note: “An Op-Ed essay on Monday described bald eagles and ospreys incorrectly. They eat fish, and their poop is white; they do not eat berries and excrete purple feces.” Years later, when I told another editor about this, she breathlessly said, “That was you?!”)

Anyway. Cycling, like everything else, has gotten harder as I’ve grown older. For much of the year, I live on a dirt road at the bottom of a mile-long hill, and some days I just don’t have the energy to make the ascent. Last summer, I was on my bike a total of five times.

Since I got the e-bike, though, I’ve been riding 15 and 20 miles a day, four or five days a week. It’s been life altering, not just making me fitter, but also raising my spirits, getting me out of the house and back into the mountains.

I felt more than a little guilty as I soared past the other riders in the Trek Across Maine. A couple of them called out to me as I passed. “What in the world is that?” asked one. “That is so awesome,” said another.

Ryan Rzepecki, the chief executive of Jump Bikes, a leading manufacturer of e-bikes, says that this is the beginning of a multiyear shift away from regular pedal to electric bikes for his company. “When people first jump on an e-bike, their face lights up,” said Mr. Rzepecki. “It’s exciting and joyful in a way that you don’t get from a regular bike.”

Nowhere was this clearer to me than when I left the Trek Across Maine peloton and paused at the top of something called Blueberry Hill. For a moment I thought I was alone. But then I saw another rider had pulled over, and he had the same kind of bike as mine, a Specialized Turbo Como. We exchanged goofy grins, and I told him that the bike had changed my life.

At that moment, from down a mountain trail, came a dozen wounded veterans also on e-bikes. Some men had prosthetic arms and legs. They were from the Travis Mills Foundation, as my companion explained, and some of them hadn’t been on a bike in years.

Now they’d ridden all the way to the top of Blueberry Hill.

“You’re not the only one whose life got changed,” the man said.

I rang the bell on my bike — ding! — and headed into the mountains, feeling hopeful, feeling as if I still have lots of adventures ahead.

The Times is committed to publishing a diversity of letters to the editor. We’d like to hear what you think about this or any of our articles. Here are some tips. And here’s our email: letters@nytimes.com.